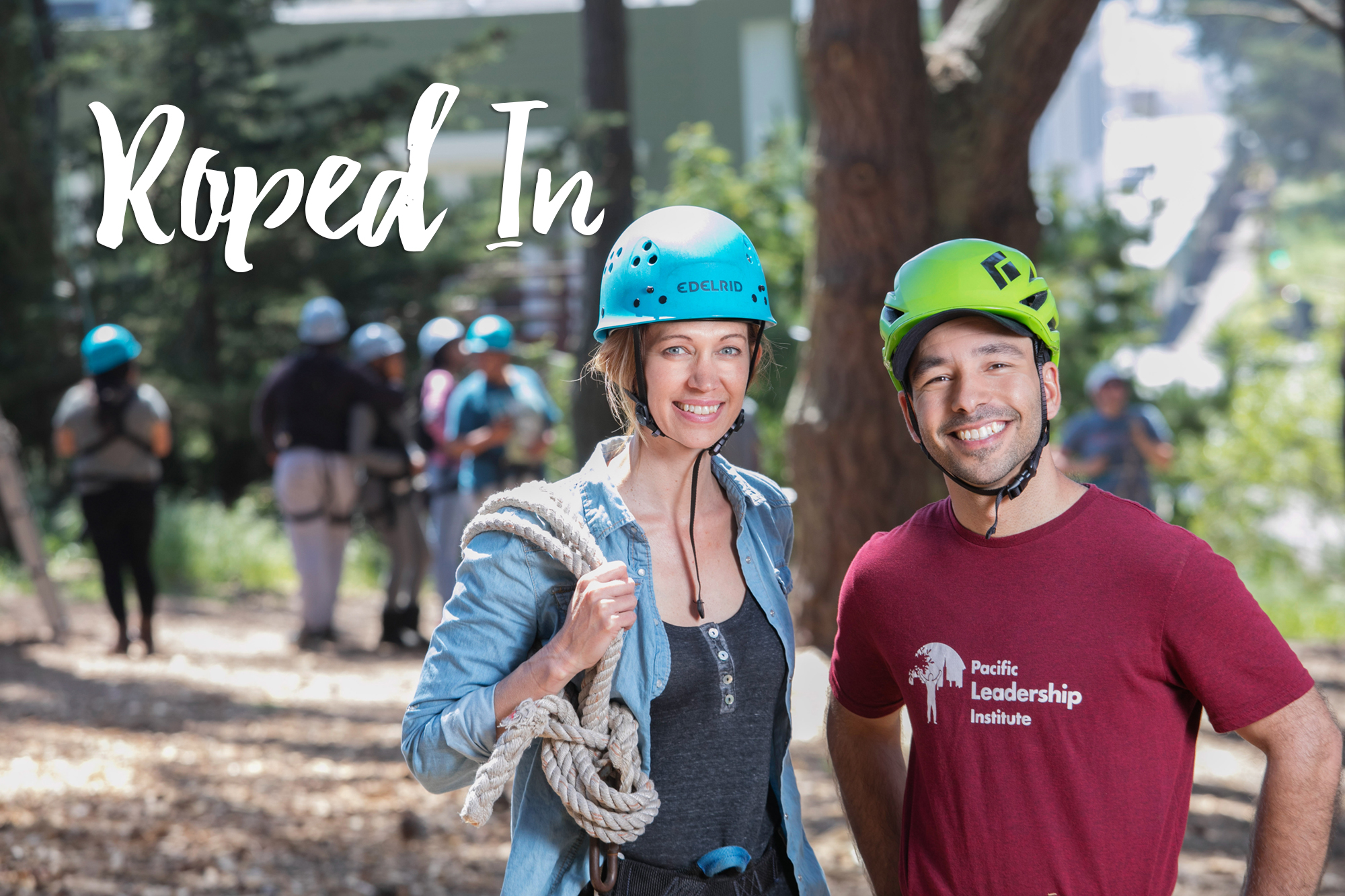 At 16, Ian Mosier was shy, chronically traunt, and on the verge of dropping out of San Francisco's Galileo High School. He was given a choice to enter a community service learning program of face expulsion. Mosier decided to give the program a try and was referrred to the Pacific Leadership Institute (PLI), which is based at SF State's Department of Recreation, Parks & Tourism. PLI uses outdoor, experience-based activities to teach teamwork, leadership, self-esteem and life skills. A primary feature of the program is training teens to lead PLI's Adventure Challenge Course, a system of outdoor team-building challenges located on a four-acre parcel of land at Fort Miley withing the Golden Gate National Recreation Area.

"Going to the ropes course and being good at it, and getting positive feedback, and getting better - that was very formative process for me."

For a kid who hadn't gotten much praise for his academic performance in recent years, Mosier says, "Going to the ropes course and being good at it, and getting positive feedback was very transformative for me." Being a leader and helping others made him feel he was a part of something larger than himself, he says. "My sense of duty kicked in. I re-engaged with my school and with my education."

Mosier not only graduated from Galileo, but following a PLI internship, he was hired to be a team leader and eventually became the PLI ropes course coordinator. He later completed two years in SF State's Recreation, Parks and Tourism Administration program.

But the Fort Miley Adventure Challenge Course, in continuous operation since 1979. is the Institute's marquee program. Last year 14,000 people, mostly youth, enjoyed PLI's programs, with more than 10,000 of them participating in the Adventure Challenge Course. The success of the Fort Miley program has opened the door to discussions with the National Park Service, which manages the Golden Date National Recreation Area, on an expansion plan that includes building a large group campsite and a universally accessible ropes course designed to serve those with disabilities.

PLI owes its long-term success to a business model that is primarily fee-for-service, and it has proven to be both sustainable and community-centred. Partner institutions like San Francisco Unified School District are repeat customers who write the Institute's activities into annual grants. "We have a built-in audience with the different school districts and with different programs that use our services year after year," says Drew McAdams, PLI's chief of programs. "We've been able to be autonomous with that not-for-profit model."

Vida Sanford is one such steady customer. A district coordinator for San Francisco Unified School District's Mentoring for Success program, Sanford, who earned both her B.S. and M.S.W. at SF State, manages Projet Arrive, a program supporting ninth graders as they transition into high school. Project Arrive's small groups have been coming together for the ropes course challenge for the past five years.

"There are 50 ninth graders who have to learn to get along with each other for the next four years, so there's a real value in having this experience together to help deepen their sense of community and trust," says Sanford. The course offers kids something schools can't. "We have a lot of kinesthetic learners in our cohort... they're very physical, which may be the reason traditional schooling's not working very well for some of them," she says, adding, "It's really beautiful to see them in action out there."

The ecology of peer leadership

What really makes PLI unique is the way its programs and clients engage with each other to create a rich, value-added ecosystem, with the various participants leading and inspiring future groups.

Mosier is home-grown in that ecosystem. His peer-leadership experience was part of PLI's Youth Lead! training, which teaches teens to facilitate groups and lead ropes-course challenges. New cohorts shadow the veterans, then the veterans shadow the trainees as they gain new skills and confidence. PLI then hires on newly trained kids as leaders. It's a process that feeds on itself, McAdams says. "The diversity of leadership really works for us."

PLI's partners understand that value. "I love to schedule our ropes course on days when older teens are out there showing what they can do as leaders." Sanford says. "Our ninth graders love it, and it's great role-modeling for them because they see, 'Oh, that could be me."

McAdams works to enhance this mentoring further, trying to match visiting students with leaders who graduated from their schools. Such peer relationships "add another layer of cultura; relevancy to the groups that we serve," McAdams says. It's a quality that makes PLI a rarity in outdoor education, a field often dominated by white males. At PLI, 75 percent of the leaders are people of color, and 95 percent of activities have youth in leadership roles. About 80 percent of all participants are under age 25.

"That whole idea of cultural relevancy - not only in the programming but in the staffing - creates a welcoming environment and breaks the ice," McAdams says.

Jason Martinez was a student for whom those demographics made a difference. At 15, a period of transition had him living out of boxes with his mom and godparents, with no room of his own. He became more interested in being out with friends than going to school. His grades sunk.

He landed at Downtown High School, a continuous school for kids with credits to catch up on. But being at his new school made him feel like he'd done something wrong, he said, and he struggled to fit in. Then at an orientation program, a teacher from Get Out and Learn, and outdoor education-based pathway at Downtown High, gave a slideshow showing kids camping, hiking, and facilitating at PLI's ropes course.

"I see all these inner-city youth - people who look like me - doing it and having fun," he said. "I was like, wow, people in the city acutally do this?" Kids from the programs were at the presentation. "They shared stories of overcoming challenges and overcoming fears - that's what drew me into the program," Martinez said.

Soon he was at Fort Miley, scaling tall poles, then jumping off, swiping at dangling objects to test his limits. Far outside his comfort zone, Martinez says the challenges helped him located his self-confidence and make connections. He saw that just as he choose his own path down the cliff, his new school would hlep him get to graduation. "I learned I'm taking a different route and I'm going at my own pace... but I'll get there," he says.

Martinez earned his diploma and returned to work at PLI's ropes course, often sharing his story with new arrivals from Downtown High School. His PLI leadership experience with helped him see "how I've inspired other people just by being who I am," he says, and led him to the education field. He worked with kids in after-school programs, and now, at 27, he's enrolled at City College and, through an AmeriCorps placement, he's working with Sanford at Mentoring for Success.

McAdams loves seeing such trajectories. The best part of my job is watching the development of these young leaders, not only when they start to gain confidence... but then transfer these skills sets to other parts of their lives," he says.

"The best part of my job is watching the development of these young leaders, not only when they start to gain confidence... but then transfer these skill sets to other parts of their lives."

Mosier, who's 34, is still applying PLI skills nearly two decades on. He's returning to SF State, this time as a psychology major, and plans to go on to pursue a master's in counseling. It was the ropes course and overall experience with PLI that guided him along that path.

Out on the course for team-building exercises with his master's students, Professor of Counseling Alvin Alvarez, now dean of the College of Health & Social Sciences, observed a special aptitude in Mosier.

After all these years, Mosier says PLI and SF State professors are still changing his life. "I think that's pretty cool."

Donate to the pacific leadership institute

For more information about donating to the College of Health & Social Sciences, contact: