Donate to the GCoE

To the world, he is known as Ahmet Ustunel (M.A.’09). Others know him as the blind captain. But for some, he will forever be known as a hero. Born with a rare form of cancer in the eyes, Ahmet has been completely blind since the age of three.

Growing up in Istanbul, Turkey, he remembers hearing stories of an ancient legend, Phineus, a blind king who guided sailors across the dangerous waters of the Mediterranean Sea. Since then, the young boy dreamed of one day navigating across the Bosporus Sea just like his mythological hero. For years, he faced not only the statistical odds of success but also financial barriers. Access to the essential high-tech devices that are required to create such systems that would allow him to turn those boyhood dreams into realities seemed completely out of reach.

That is until he was announced as one of the recipients of the Larsen Scholarship for the College of Graduate Education at San Francisco State University in 2007. The award helped fund a project creating a non-visual guidance system that allows ocean lovers who are visually impaired the opportunity to navigate themselves through solo trips across bodies of water. 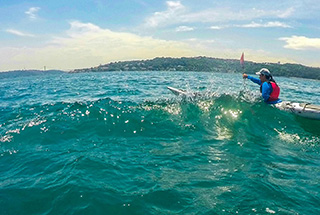 Ahmet devoted his time, education, and focus to developing the system. After graduating with a Master’s in special education in 2018, Ahmet became a teacher of visually impaired students in San Francisco public schools. He also won a grant to develop a non-visually operated smart kayak, known as NOSK. What once seemed like childhood dreams became a full-blown reality when he took to the waters of the great Bosporus Strait and navigated NOSK from Asia to Europe during the summer of 2018. Ahmet becomes the first blind person to cross the sea without any visual cues and will forever hold the title of ‘hero’ for those who aspire to accomplish dreams that may seem impossible.

Donate to the Graduate School of Education