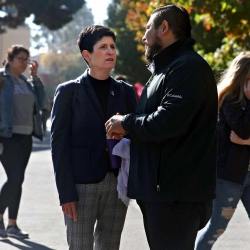 Morale at San Francisco State University has at times been as gray as the fog rolling in off the ocean. Strained relations between students and the administration. Tension among ethnic groups. Resentment within faculty.

But a warming trend is taking hold on the campus of nearly 29,000 students — and many credit their new president, Lynn Mahoney, a former provost of Cal State Los Angeles and now San Francisco State’s 14th president. She arrived this semester — the university’s first permanent female president — and replaced Leslie Wong, who retired after seven years.