Later in his career, Rowen became known for developing outstanding coaching talent. Two of his assistant coaches later led teams as head coaches in Super Bowls: Andy Reid with the Philadelphia Eagles and Mike Holmgren with the Green Bay Packers and the Seattle Seahawks. Another, Bob Toledo, became head coach at UCLA and Tulane University. 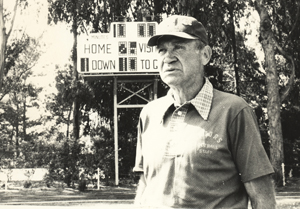 Rowen was a staunch advocate for all sports and student-athletes at SF State. He was first and foremost an educator who taught, coached, and worked on behalf of students and sports. In his honor, the Gator Gridiron Club created the Vic Rowen Scholarship in 2001. To celebrate the 20-year anniversary of the fund's inception, the Club spearheaded a fundraising campaign in 2021 to permanently endow the fund with $150,000 to support student-athletes majoring in Kinesiology with a concentration in Physical Education or a minor in Coaching. As of October 2022, the group has raised $104,000 towards the scholarship fund.

Student scholarships are vital to attracting and retaining talented student-athletes to Gator Athletics. For many, a scholarship can be the deciding factor in a student's ability to attend college.

Please join in on the worthy tribute to one of SF State’s most loved coaches and mentors.

For more information about donating to the Vic Rowen Scholarship, contact: