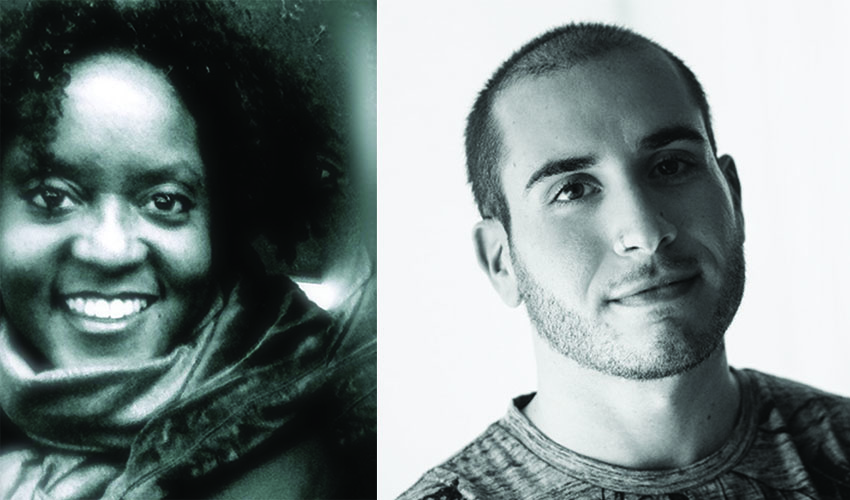 by Strategic Marketing and Communications

San Francisco State University has named Joseph Cassara and Tonya M. Foster the George and Judy Marcus Endowed Chairs in the Creative Writing department. Cassara, who most recently taught in the department of English at Fresno State University, joined San Francisco State as an assistant professor of creative writing. Foster most recently taught writing and literature at the California College of the Arts in Oakland. She is currently an assistant professor of poetry at SF State.

Both faculty will contribute to the literary life of the Bay Area by holding public lectures and readings as well as by spearheading events with visiting authors, says San Francisco State Creative Writing professor and department chair Nona Caspers. The University selected Foster and Cassara partly because of the significant contributions they’ve made to the literatures of the African diaspora and Latinx cultures.

Dean of the College of Liberal & Creative Arts Andrew Harris said he’s happy for the next generation of students who will get to work with the new faculty. “These two will bring their creative brilliance and literary empathy to the department, the university and the Bay Area as a whole,” he added.
Cassara is an award-winning author. His debut novel, “The House of Impossible Beauties” (Ecco/HarperCollins, 2018), is an imagining of characters from the 1980s documentary “Paris is Burning,” which explored New York City’s drag ball scene. The novel won the Edmund White Award for Debut Fiction, two International Latino Book Awards and the National Arts and Entertainment Journalism Award for Best Fiction Book and was a finalist for the Lambda Literary Award for Gay Fiction.
Cassara’s short fiction, essays and criticism have appeared in or are forthcoming in The New York Times Style Magazine, The Boston Review and a London-based anthology titled “The Queer Bible.” He holds a B.A. in English and Comparative Literature from Columbia University and an MFA in Fiction from the Iowa Writers’ Workshop.
Tonya M. Foster is the author of “A Swarm of Bees in High Court,” the bilingual chapbook “La Grammaire des Os” and the full-length collection “A Mathematics of Chaose: Thingification.” She is co-editor of the essay collection “Third Mind: Creative Writing Through Visual Art.” She is also an editor for the biannual literary publication Fence Magazine and the African American Review, a quarterly aggregation of peer-reviewed scholarly essays, fiction and poetry.
In 2020-21, she was the Lisa Goldberg Fellow at the Radcliffe Institute at Harvard University, where she completed “AHotB,” a book-length poetry manuscript that explores Fannie Lou Hamer’s idea that “a Black woman’s body is never hers alone.” Foster has also been a recipient of fellowships from the Ford Foundation, the Andrew W. Mellon Foundation, the MacDowell Colony, the Headlands Center for the Arts, New York Foundation for the Arts and the Pan-African Literary Festival. She received the 2020 Creative Capital Award for “Monkey Talk,” a multidisciplinary project on surveillance, aesthetics and race. She earned a B.A. in English from Tulane University, an MFA in Poetry from the University of Houston and a Ph.D. in English from the Graduate Center at the City University of New York.

"Their literary work and work as artists who care about education as a practice of freedom - to question, to grieve, to celebrate - will help keep us awake and in motion as a multi-voiced campus and Bay Area community."     - Nona Caspers, Creative Writing professor and department chair

The establishment of both positions was made by possible by alumni George (B.A., ’65) and Judy Marcus (B.A., ’62), who gifted SF State’s College of Liberal & Creative Arts $25 million in November 2018. The funding helped establish four endowed chair positions, two in the Creative Writing department and two in the School of Cinema.
The University’s creative writing program has produced a number of successful writers and employs many award-winning authors, Caspers says. The new faculty will further cement SF State’s reputation by cultivating talent in students and deepening the Bay Area’s literary scene.