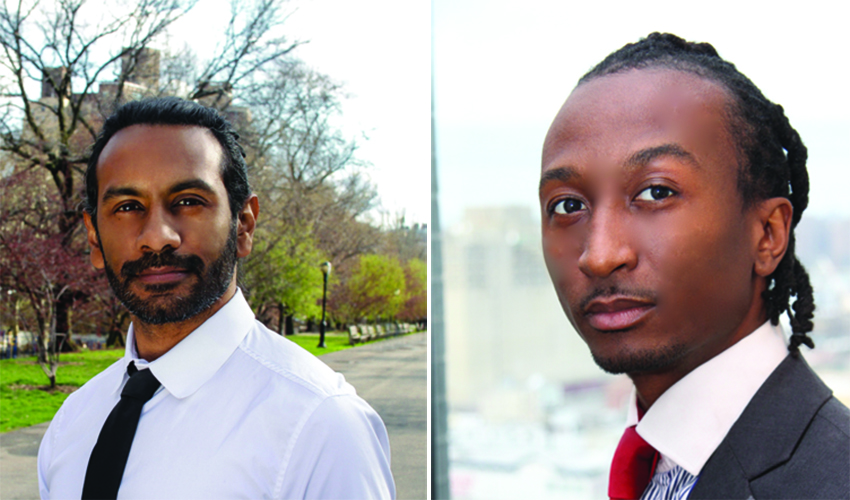 San Francisco State University has named Artel Great and Mayuran Tiruchelvam the George and Judy Marcus Endowed Chairs in the School of Cinema. They will join the University as assistant professors in cinema in the fall of 2020, bringing with them extensive backgrounds in both filmmaking and cinema scholarship.
Great and Tiruchelvam will lead new projects and coursework within the School of Cinema and contribute to the overall intellectual life of the University community, the Bay Area and beyond, says School of Cinema Director Celine Parreñas Shimizu. Tiruchelvam, who often featuresunderrepresented groups in his own films, will teach filmmaking through a social justice lens. Great, whose scholarly work delves into the intellectual history, critical discourse, and aesthetics of Black cinema and visual culture, will teach courses in African American film studies.
Both new faculty members say what drew them to San Francisco State is the University’s ongoing commitment to social justice and equity, as well as the world-class School of Cinema. “In collaboration with students and colleagues at the School of Cinema, I hope to honor that tradition of resistance,” Tiruchelvam said.

"I look forward to teaching about the rich contributions, culture and politics of Black cinema in both the American context and across the African diaspora."
- Artel Great, Marcus Endowed Chair in African American Cinema Studies

Tiruchelvam, the Marcus Endowed Chair in Social Justice Fiction Filmmaking, is an award-winning screenwriter and producer with a background in community organizing and activism. His feature screenwriting debut, the neo-noir “The Girl Is in Trouble,” was released theatrically in 2015. His producing credits include the documentary features “The Untold Tales of Armistead Maupin” (Audience Award, SXSW 2017), about the acclaimed San Francisco author, and “To Be Takei” (Sundance in 2014), a portrait of actor, activist and pop culture icon George Takei. He received a B.A. in American Studies and African American Studies from Wesleyan University and an MFA in film from Columbia University. The Sundance Institute fellow previously taught producing and screenwriting at Columbia University and Sacred Heart University.
Great, the Marcus Endowed Chair in African American Cinema Studies, is an Independent Spirit Award-nominated filmmaker. He is a contributor and editor of the forthcoming anthology “Black Cinema and Visual Culture: Art and Politics in the Twenty-First Century” (Routledge, 2021). As a fellow at the Cinema Research Institute in Manhattan, he created Project Catalyst, an app that distributes alternative cinema and content created by and for communities of color. He’s held academic positions at New York University, University of North Carolina, Chapel Hill, and Spelman College. He earned a B.A. in Film and Television Production and an M.A. in Cinema and Media Studies from the University of California, Los Angeles. He earned his Ph.D. in Cinema Studies at New York University, Tisch School of the Arts.

"In collaboration with students and colleagues at the School of Cinema, I hope to honor [San Francisco State University's] tradition of resistance."     - Mayuran Tiruchelvam, Marcus Endowed Chair in Social Justice Fiction Filmmaking