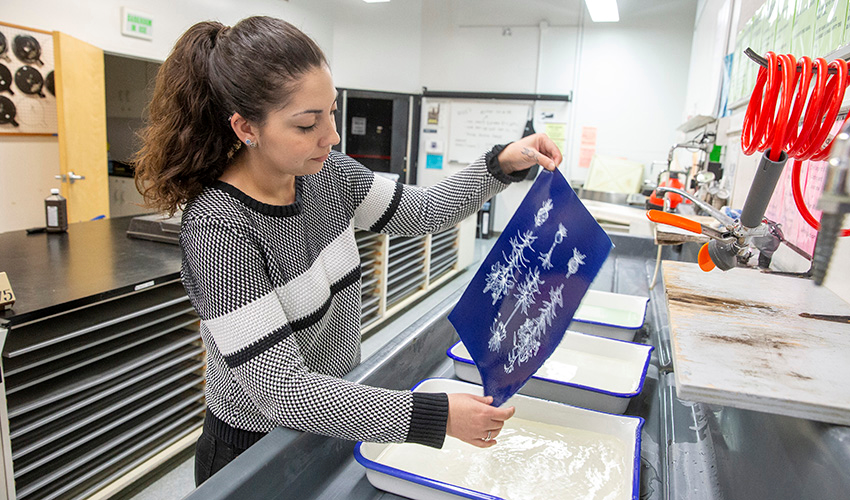 Artist Charlotte Beck has been drawn to the spiritual and the sacred for as long as she can remember. It’s a theme she’s woven into “Far Shooter,” an upcoming exhibition at Recology in San Francisco and the culmination of her four-month artist residency at the resource management company.
Beck, who studied fine arts at San Francisco State University and graduated in December, was one of nine artists selected for Recology’s 2019 Artist in Residence (AIR) Program. Once a year, the program selects six professional artists and three art students from a pool of applicants. The artists receive a small stipend, studio space and access to materials — junk — that they’re expected to incorporate into their art and then exhibit in a final public showcase.
Alumna Deborah Munk (M.A. ‘00), director of Recology’s AIR program, says artists have used everything from flip-flops to Styrofoam in their pieces. Since 1990, more than 150 professional artists and 50 colleges students have participated in the program, which started in San Francisco and expanded to other Recology facilities along the West Coast. A goal of the program is to demonstrate the power of reuse through an artist’s creation.

“My show is a culmination of different worldviews, what the owners of these objects believed about the world. [...] I was drawn to the connections individuals had with their items.”
- Charlotte Beck

In her upcoming show, Beck pays homage to Greek mythology, the occult, sacred totems and personal tokens. The title of her exhibition refers to the Greek god of archery, who is sometimes called “Apollo the Far Shooter.” Like Apollo with his bow and arrow, Beck says she used her intuition to pierce through the trash heap and uncover its treasures. She collected books on anatomy and theology, personal notes from someone studying hieroglyphics, a series of amateur nature photographs, a gardening catalogue — all well-loved items that she says were once sacred to their owners.
“My show is a culmination of different worldviews, what the owners of these objects believed about the world,” she said.
One discovery was a series of 18 photographs, all of the same mountain, taken over a 10-year period in the 1970s. “They’re taken from all angles and during all seasons,” she said. “This mountain was obviously important to this person. I was drawn to the connections individuals had with their items.”
Beck’s 12-piece show comprises mostly works on paper — specifically, photographs and cyanotypes, cyan-blue prints created through an old photographic printing process originally used to make blueprints. Beck learned about the technique in San Francisco State Assistant Professor of Art Sean McFarland’s Advanced Topics in Photography course. What appealed to her about the process was its simplicity.
“I could do this in my bedroom if I wanted,” she said.
To make the prints, Beck created transparencies of images she scavenged. She placed them onto a paper that had been coated with a light-sensitive material. Next, she exposed the paper to light for about 10 minutes. After that, she washed the prints in a bath of water and hydrogen peroxide, which turned the light-exposed area a rich Prussian blue.
One image Beck used in a cyanotype came from a catalogue of Dutch flower bulbs. “I was looking through the illustrations and it reminded me of Anna Atkins, one of the first female photographers to use the cyanotype process to document botanical specimens. I wanted to play off that a bit,” Beck said.
A diagram found in a book on Kabbalistic numerology inspired another print. “I liked the way it played off the history of the cyanotype process,” she said. “Before Anna Atkins, it was just for blueprints, and in a way, the numerology diagrams are blueprints of people’s consciousness.”
The Long Beach native has always been skilled in her technique, McFarland observes. He also says he’s enjoyed watching her work evolve as she’s developed her own artistic language. She’s always been interested in alternative forms of spirituality and belief systems, but she didn’t really see a place for that in her work, he says.
She’s studied witchcraft for a number of years, something she once felt embarrassed about. But she doesn’t let that bother her these days. “I’m 28-years-old now, and I don’t care anymore."
“Recently, she’s found a way to incorporate those concepts into her artwork in a unique way,” McFarland said. “That’s always exciting to see when it happens to a student.”
Charlotte Beck received SF State's Christine Tamblyn Memorial Scholarship.