Donate to the CoES

Belva Davis was accepted into SF State in the 1950s, but could not afford the cost of college. Instead, she began a career in journalism, eventually becoming the first female African American television reporter in the Western U.S. Belva worked as a news anchor for a number of Bay Area radio and TV stations in a career that spans nearly five decades. In 2014, she was the keynote speaker at the SF State Commencement.

In 2018, Belva donated $10,000 to the College of Ethnic Studies to honor Ken Monteiro's long tenure as Dean of the College of Ethnic Studies, and the college's 50th-anniversary celebrations. She also made the generous donation of an archive of her work, including a collection of papers, memorabilia, and video images documenting her distinguished career in 2015. Her collection can be viewed at diva.sfsu.edu/collections/sfbatv/11414. 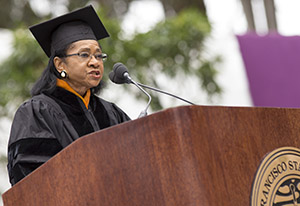 “Don't be afraid of that space between your dreams and reality. If you dream it, you can make it so.”-Belva Davis, 2014 SF State commencement speaker

For more information about the College of Ethnic Studies scholarships, contact: