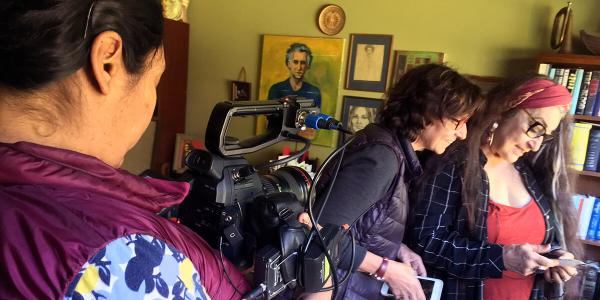 "We Are Here, We Have Always Been Here"

'We Are Here, We Have Always Been Here': SF State Produces First-Ever Documentary on Bay Area Iranian Community

The Nasiri family story may sound familiar. A young man, Steve Saeed Nasiri, moves from his native Iran to Berkeley for college, supports himself by working at restaurants and eventually becomes a successful Silicon Valley entrepreneur and angel investor. But this American success story hasn’t been told yet. It will be soon, in a new film produced by San Francisco State’s Documentary Film Institute and Center for Iranian Diaspora Studies.
"We Are Here, We Have Always Been Here" is the first documentary to focus on the Bay Area’s Iranian community. The Nasiri Foundation recently contributed a $10,000 grant to the film.
“Now more than ever, the Iranian American community is understanding the necessity of being more organized as a diaspora — to share our stories loudly, to be proud of where we came from and to vocalize all that we have contributed to our adopted country,” says Shanna Nasiri, fund manager for the Nasiri Foundation. “We need empathy, not just for the Iranian American community, but for immigrants at large.”
We Are Here documents the complex personal histories that have brought Iranians to the Bay Area for more than 70 years, spanning four generations.
The greater San Francisco area is home to the second largest Iranian population in California, and likely the second largest outside of Iran itself, says Persis Karim, We Are Here co-director.
“This is an evolving community that continues to shape the Bay Area through arts, culture and innovation,” says Karim, director of the Center for Iranian Diaspora Studies and a professor of Comparative and World Literature. “They continue to grapple with the historic trauma of leaving Iran under difficult circumstances.”
Ultimately, the film conveys the resilience and determination of this community, despite the political turmoil that has shadowed Iranian Americans for decades.
“It isn’t easy to pick up and leave your place of birth, oftentimes on your own and away from your family,” Shanna Nasiri adds. “It takes a lot of drive and motivation, and I think the Iranian American community in the Bay Area is a phenomenal example of how those qualities can be channeled to make a significant and positive impact in the world.”
Soumyaa K. Behrens, Documentary Film Institute director and Cinema lecturer, is the other co-director of We Are Here. She says the film employs a personal aesthetic that focuses on how historic events in the Bay Area and Iran have affected the community.
“The mosaic of personal and historical elements shows a picture of Iranians deeply rooted in the Bay Area,” she says.
The film will be completed in March 2020. Josh Peterson is consulting editor. Students will help with production, post-production and archival research.

Donate to the Center for Iranian Diaspora Studies