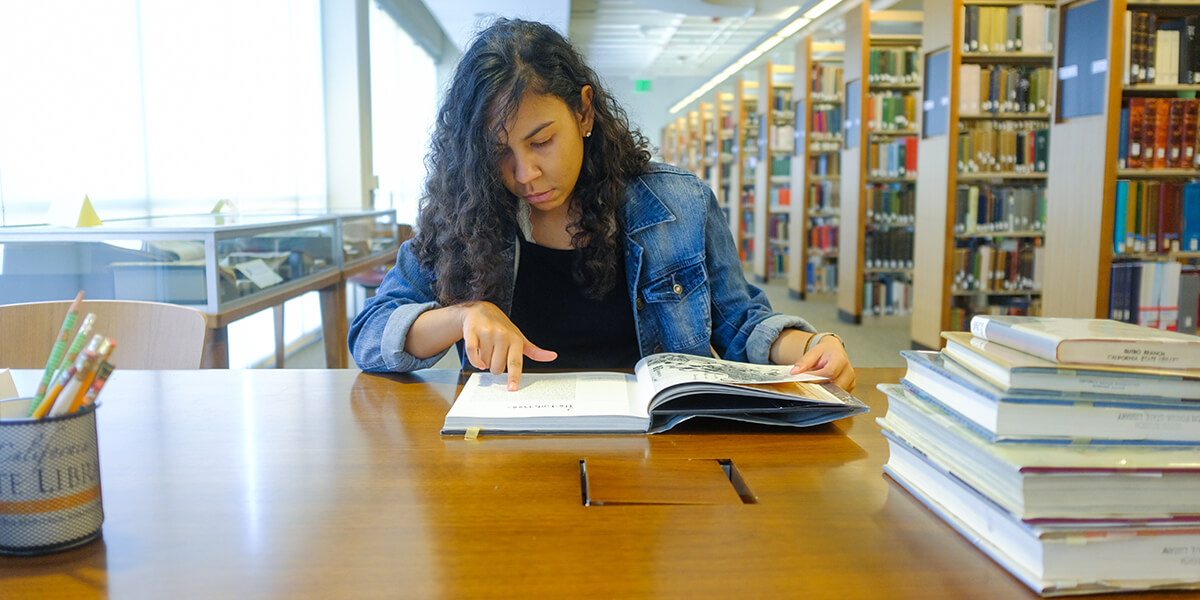 “I was struck by both the sophisticated content of your research projects and the incredible poise you all showed in presenting your topics. Congratulations on completing these under very unusual circumstances — another reflection of your talents and determination.”

The student research fellowships and assistantships are made possible through the George and Judy Marcus Funds for Excellence in the Liberal Arts, established by alumni George and Judy Marcus with a $25-million donation in 2018. Marcus scholars have already been successful. The Council on Undergraduate Research’s annual Posters on the Hill conference accepted International Relations major Mikayla Cordero’s project on the rise of left-wing nationalism in Ireland. Cordero was among 60 students selected from 350 applications nationwide.

“You represent the very best of SF State,” SF State President Lynn Mahoney said at a May 26 video conference where fellows and assistants presented their work. “I was struck by both the sophisticated content of your research projects and the incredible poise you all showed in presenting your topics. Congratulations on completing these under very unusual circumstances — another reflection of your talents and determination.”

Early in her research on student veterans, Marcus Undergraduate Research Fellow Janelle Scarritt discovered significant inaccuracies in sociology, psychology and anthropology publications on the topic. Interviewing student veterans at SF State enabled her to discover fresh perspectives on their capacities and challenges.

“This experience has shown me what it takes to pursue undergraduate research, and that I am capable of doing it,” Scarritt said.

“The Value of a Life”


For Jamila Hayes’ Marcus Undergraduate Research Fellowship, she directed “The Value of a Life,” a documentary about the divergent life paths she and her brother have taken. Hayes is thriving — she just graduated this month — but her brother has fallen victim to addiction, incarceration and mental illness. She said the film was her first opportunity to express her feelings about her brother.

“The reality of our world is that if you are Black you will be treated worse than your white counterparts,” said Hayes, a Cinema major. “If you are Black, homeless and a drug addict, you are treated even worse and with even less respect. As a society we need to work harder to stop perpetuating harmful ideologies that have such a negative impact on communities of people. I hope that my film will be a part of causing that change, and that it will allow people to start having these conversations.”

As faculty mentor, School of Cinema Director Celine Parreñas Shimizu challenged Hayes to situate the film’s approach. In preparation, Shimizu assigned readings of scholarly articles on prison systems and aesthetics. In the end, Shimizu herself gained valuable insight from Hayes.

“I learned about the powerful personal understanding Jamila’s courageous filmmaking achieves about enduring pain, trauma and abuse and the hope that comes from love, affection and intimacy,” Shimizu said.

“My research on presidential agenda setting relies quite heavily on quantitative, mathematical analysis, so my goal for our partnership was to identify and research some historical cases to illustrate the theoretical dynamics at play,” Eissler says. “She brought a curiosity and fresh perspective to the selection of cases for us to research, which gave the project a greater clarity and understandability.”

Although the COVID-19 pandemic affected students’ ability to conduct field research this spring, they were able to complete their projects. Hayes, for example, had to abandon plans to spend one day in San Francisco filming with her brother. Instead, she interviewed him in her apartment and used footage from one of their childhood homes.

Overall, the Marcus fellowship has given Hayes advice to pass along to next year’s cohort.

“When things become chaotic and confusing, remember what the purpose of your proposal was about,” she said. “Sometimes it’s helpful to go back to the basics in order to better understand where to go next.”

Three of the projects include two student assistantships.

Click here to read more about the impact of the George & Judy Marcus Funds at San Francisco State.