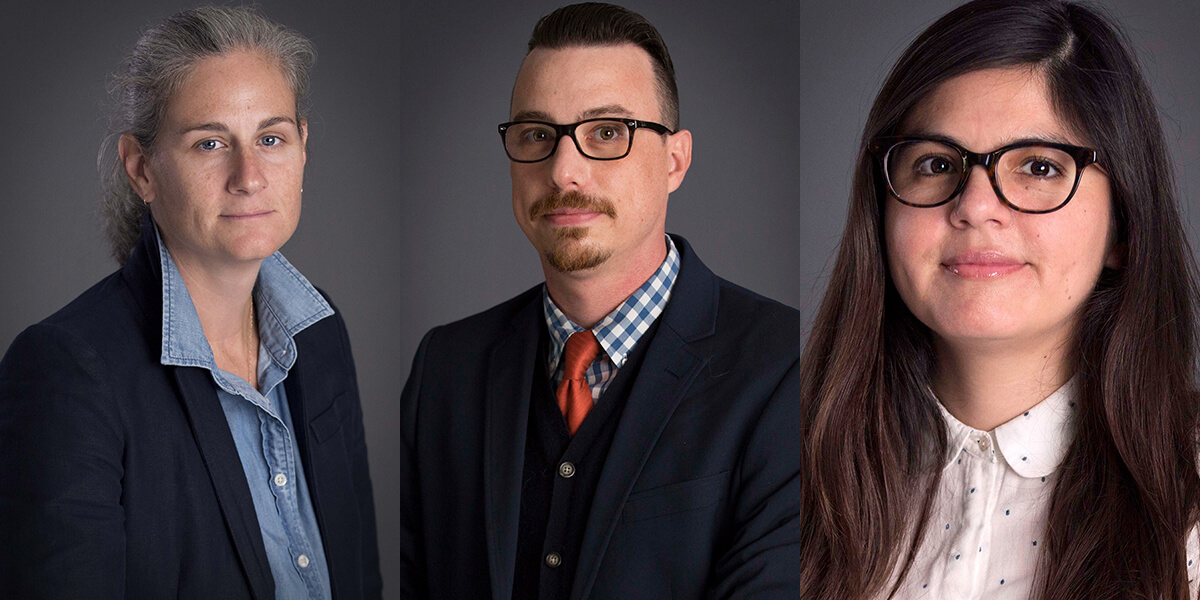 The College of Liberal & Creative Arts’ Marcus Early Career Research Award will help three faculty members complete research and creative work encompassing art, law and cinema studies.
The award, supported by the George and Judy Marcus Funds for Excellence in the Liberal Arts, provides a one-semester leave during the 2020 – 2021 academic year. Probationary tenure-track faculty in their third, fourth or fifth year are eligible.
Libby Black
Assistant Professor of Art Libby Black will complete “Photobook as Lineage,” a collaborative project with Chris McCall, director of Pier 24 Photography in San Francisco. Black will re-create 50 notable photo books as painted paper sculptures for her own book and an exhibition at the Aperture Foundation gallery in New York City. Her artwork for the book — to-scale, three-dimensional re-creations of objects using paper, hot glue and acrylic paint — will become part of Pier 24 Photography’s permanent collection.
Black said that the project will help her delve further into the intersection of sculpture, painting and photography and, ultimately, benefit students. “I will be able to integrate these interdisciplinary explorations into the curriculum,” she said.
Nicholas Conway
Assistant Professor of Political Science Nicholas Conway will complete a book exploring why, despite a massive increase in U.S. litigation, so few civil cases make it to court. In research that he began in his dissertation at Texas A&M University, Conway has found that unelected judges have manipulated legal procedure that results in a reduction in equality and civil rights.
“Rather than letting a case develop until ripe for consumption by a jury, the case has been reoriented for evaluation by a judge who determines whether such claims may even be presented at a trial,” Conway said. “This is the rush in the rush to justice.”
Elizabeth Ramirez-Soto
Assistant Professor of Cinema Elizabeth Ramirez-Soto will complete a book addressing exiled Latin American filmmakers who found a new home in Europe in the 1980s. Films they made in Europe aired on television networks in Germany, France, Spain, the United Kingdom and beyond.
Titled “Transnational Experimental Television: The Global South on European Screens,” the book examines geopolitical issues and the convergence of film and television.
“The period under study signals a shift from the notion of ‘Third World’ to that of the ‘Global South’ — something explicitly seen in the title of [U.K.] Channel 4’s series ‘South,’ which co-produced many films by directors from Latin America,” Ramirez-Soto said.